Yesterday, says salon.com, buffalo-lover Timothy "Speed" Levitch premiered his short film: "Live From Shiva's Dancefloor," at the Sundance Film Festival, exactly a week after the public hearings on the new WTC site proposals. The film is a 20-minute empassioned proposal that Ground Zero be converted into an open range for American bison, who are nearly extinct. His point is that the buffalo, and the Native Americans with whom they once co-existed, have undergone 4 centuries of terrorism, thinly veiled. The buffalo, like the Native American Tribes, have been displaced and disregarded, and "Speed" wants the wild oxen to enjoy some prime real estate and provide a wake up call to those who are ignorant to their plight. But can the poor beast really handle another urban stomping ground? Is this fair to the buffalo? Sure, there are buffalo in Golden Gate Park, (11 of them) but SF is full of hippies, tree huggers, and gays. People walk slowly. We do yoga. We eat goji berries and blue-green algae. At any given moment, there is probably someone in Golden Gate Park staring wistfully into a buffalo's eyes, sending metta (loving kindness.) We can relate to Buffalo. They are peaceful creatures, partially because they're so huge (between 1000-2000 lbs) that they have no natural predators (other than humans.) Similarly, San Francisco people are also generally loved by other animals, but sometimes have a hard time making friends with other humans. And like a lot of people in SF, Buffalos are actually queer, and even transgender, according to wikipedia. "Homosexual behavior, including courtship and mounting between bulls—is common among bison." So, you know, we're used to it. But are buffalos safe with New Yorkers? New Yorkers are busy. Would New Yorkers stop, and stare lovingly into those deep brown eyes? My dad lives in New York. He walks really fast. Would he have time to visit the buffalo? Maybe after orgware is launched.

Levitch is optimistic. He envisions "sixteen acres of blazing green grass, a place for togetherness, healing out loud, and spontaneous culture," says Levitch. "And in the middle of the park, the memorial should not be an inanimate slab of stone, but should have a heartbeat." The heartbeat of buffalo. 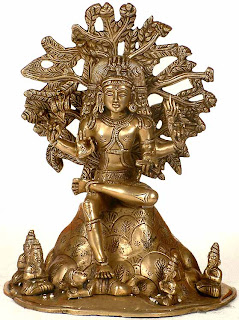 This sculture shows Śiva-Dakshina-Murti or Mahayogi, one of the best known depictions of Śiva. He is seated on the tops of the Himalayas in deep meditation. He holds the mudra of fearlessness with one of his right hands.

Śiva is the force that rips asunder our illusions. This can occur in a fiery display, in a column of light, or in the capacity for anything to switch rapidly and without warning to its opposite. This can also happen quite pleasantly, sometimes in a subtle, surreptitious percolation of new beliefs, which penetrate the old and render them irrevocably transformed. The destroyer of Maya, illusion, Śiva is the force that rips the clothing of the ego to shreds, that takes us to our knees with grief, and that wrenches us out of deeply ingrained habit. Painful as the letting go is, Śiva shines with such deep truth through the changes, that even in grief or loss of what we thought was 'self', we know the benificence of the act. For while Śiva is the force that tears asunder the separateness, Śiva is also the source of the separateness. Śiva is the formless, and Śiva's creative power, Śakti is the creatrix, who engenders the infintude of form. Form sacrifices itself, to become formless again. The manifest yields, most obviously at death, but in any loss, and is absorbed, in part and then wholly, into the undifferentiated, into the infinite. This constant movement, into form and out of form, is the pulse, the spanda, the vibration.

The practice of Yoga is a rite, in which we participate in Spanda. We attune to the expansion and contraction of energies in the body, in the breath, and even in the realm of mind (manas). While Hatha yoga is performed in the outer realm, in the realm of physical, manifest form, inevitably as we practice we also work deeply on the inner realms. The trick is to connect this rite to the rest of our lives; and to realize that all of life is part of yoga practice. This is not to say that we need to be working all the time.... Quite the contrary. Often it is the sacrifice of effort and control, a yielding, that bears most fruit. We thus allow ourselves to be burnt away by the sacrificial fires of universal consciousness, and to come to experience all of life's changes, even the loss and frustration, as having an inherently compassionate nature, in that the inner being is being transformed via this endless participation in Spanda.

"Whether outer rites are actually performed or not makes no difference... In reality, all of life's activities are part of the great sacrificial rite (mahayaga) eternally enacted by universal consciousness within itself, to itself. In this rite, the sacrificial fire is the Great Void (mahasunya), the supreme reality (paratattva) entirely devoid of all division (bheda) and beyond the emptiness of insentience. The sacrificial ladle is awareness (cetana) and the offering is the entire outer universe of diversity, including the gross elements, senses, objects, world-orders and categories of existence, together with the inner world of mind (manas) and thought. All division between subject and object is burnt away and everything made one with the fires of consciousness."